Industrial is back! Perhaps it is or maybe we’ve just taken a trip back in time when the music was more electronic, heavy, with some obscene lyrics and guys and or gals wearing slick leather.

A little bit of both then.

The show at House of Blues was electric, filled to capacity to see KMFDM, and band that never disappoints their fans. Dimmed lights, some in red and blue, crowds moshing to heavy beats provided by one of the masterful bands in metal history. Their sound, never truly duplicated well, has lasted for nearly three decades and Sascha and company don’t show any signs of slowing down.

Most of the set was from the newest album, Kunst, the band did manage to play a couple of favorites. One of mine, Son of a Gun from XTort which always got me going back in the day. I always appreciated KMFDM’s sound, the rebellious lyrics and the kind of in your face attitude because they pretty much do whatever the hell they want. And when you’ve been around almost 30 years, you can do that.

Openers, Chant and Legion Within were also entertaining. Chant, a two piece from Texas where both members play drums and garbage cans. Yes I said, garbage cans. The whole set featured red lights, members wearing clothing that might’ve looked like something Fred Flinstone would wear but hey, who am I to judge. Funny attire aside, I liked Chant and thought they were a perfect fit for this tour.

Legion Within was also impressive. Though they sounded more like a rock/metal outfit instead of the industrial band, I enjoyed their energy and wouldn’t mind seeing them again. Of course the outfits grabbed me. Matching suits, a lead singer in tight leather. Yeah I had to look. *laughs* Truly an enjoyable night, one I wished wouldn’t end. 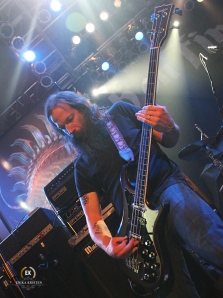