“In order to be successful, one must maintain the image of success of all times!”

3 Inches of Blood are a band from Vancouver Canada that possess not one but two lead singers. There style brings you back to the glorious days of metal when Iron Maiden and the Priest ruled, right before hair metal! Their new album Advance and Vanquish has just been released on Roadrunner and they are embarking on a tour with Satyricon next month. Right now though, they are on tour with metal granddads Metal Church and gaining fans along the way. In this interview Jamie and Cam are the main participants but the rest of the band is present to give interesting thoughts and quotes while eating their dinner sorry guys! Read on to find out what Tolkien characters they would be, their favorite folklores, and what CD’s they’d take with them on the stranded island.

Sharita: For a person that doesn’t know much about 3 Inches Of Blood, give me a little history about the band?

Jamie: We live in Vancouver (British Columbia), the band formed about 4 years ago, in Victoria, which is a city nearby. Originally we formed as a shell of another band; it was way [more fun] to play new stuff than learn the old songs. So that’s how we started, then we moved to Vancouver after living in Victoria because it’s better, a much larger center [especially if] you’re touring.  We put out a record in 2001 called Battle Cry Under A Winter Sun which was just put out in Canada, then came out in the UK later on. Earlier this year in Chicago, we recorded Advance and Vanquish, which was just released three weeks ago on Roadrunner and here we are!

Sharita: How has it been being on tour with Metal Church?

Cam: Metal Church are really cool guys, they’ve been treating us pretty well. They have even said that they feel like our dads [laughs] because they are the veterans and they like having us around.  They have even pulled me onstage for a Deep Purple cover at the end of the show.  Oh I’m giving away too much already. [Laughs]  They pulled me up like [the second night of the tour].  It’s always nice when you get along well with everybody.

Jamie: Yeah we have been getting good responses from the crowds at the shows; it’s been going really well. [Chuckles]

Sharita: Cool you just answered my next question. [Chuckles]  So in your bio it speaks of you guys being on tour with The Darkness, Black Dahlia Murder,HIMSA, tell me some of the differences of going on tour with those very different bands?

Erika: That’s really an eclectic mix of bands there.

Cam: Yeah, touring with the Darkness it was a very weird mix of bands. The label that released their first album in England was called Must Destroy Music and we were on that label as well. They weren’t that big when we got that tour then all of a sudden their popularity just shot up and we were played to thousands. It was definitely the most memorable tour; it was our first trip overseas.

Jamie: With Black Dahlia we spend a lot of time drinking and hanging out in the van. [Laughs] It was fun, but a different kind of fun.

Cam: Yeah Black Dahlia turned out to be the polar opposite because their like a death metal band, HIMSA are melodic and playing smaller venues.

Cam: All the bands we’ve toured with have been super rad, I guess we just been lucky.

Sharita: So Advance and Vanquish was released on Roadrunner, how has Roadrunner treated 3 Inches of Blood so far?

Cam: Yeah they have been very supportive, this is really our first tour as a Roadrunner band, it’s kind of a new experience but it’s not all too different. Were just getting started with them so bigger and better things will come along.

Cam: Yeah both sides are trying to figure out where they stand and see how things go. How far the promotion goes, but we’re gonna be out on the road.

Erika: So you guys won’t be too homesick?

Brian: If I had my way I would tour 12 months out of the year.

Erika: With these guys?

Jamie: Even with us. [Chuckles]

Brian: As long as we can go shopping for socks and soap that will be fine.

Sharita: Here’s a change of pace for you, our fellow interviewer wanted to ask you about the Tolkien characters, what character would you want to be and why?

Jamie: That’s a good question. When I was a wee lad playing out my fantasies I always had my bow and arrow running through the woods but that was just me. [Laughs] I was like seven but I don’t do that anymore.

Cam: I dunno if there’s like a particular character but if I was in that kind of world I’d be ranger as well as run around with a sword, bow, and arrow; stalk the wilderness.

Jamie: Just about anything, it’s all interesting. [Chuckles]

Cam: I’m into Norse mythology, Greek mythology, Egyptian mythology, and all sorts.  I think that all the fantasy just kind of came from that. I always had been into the ancient cultures and the structure power of the gods’ work and the various legends.

Sharita: Tell me about the songwriting process for the band; do you all just kind of come in with different ideas building from riffs or how does that go?

Jamie: Yeah totally someone just comes in with a riff, we basically jam it out.  Once the basic structure of the song is together, Cam and I will sit down with it and gage what the theme should be based on the feeling of the song. Basically sit down and brainstorm with it, just map it out.

Cam: We sit down with a rehearsal tape and figure out where we want to sing, we both write our own parts. We kind of feed off each others ideas and create our own lyrics off what we learn from each other.

Erika: So literally one person just comes up with an idea?

Cam: We just write down ideas and if one of us has a line we say hey take a look at this.

Jamie: Yeah we do it from like a phrase or line, just evolves from that.

Erika: How long have you guys known each other?

Cam: I played in a band with Justin a couple of years ago.  Matt used to be my roommate, Brian I just met back in the springtime, he lives in the same city as our manager and he is the only American in the band.

Brian: Which means I’m the most handsome.

Sharita: What was the name of that band?

Sharita: What other bands have you guys been in before 3 Inches of Blood?

Brian: I was originally in the Wu-Tang Clan [everyone laughs]

Brian: I was called the Paleface Killer and naturally that’s where Ghostface got his name so. [laughs]

Sharita: Are there any other bands that are out know that you like personally?

Shane: Venomous Concept is big with us. [Everyone in the band agrees]

Brian: These Arms Are Snakes.

Cam: We have a Billy Joel tape in the van.

Shane: A lot of ZZ Top, like their first album

Sharita: As far as influences, who would they be?

Erika: Ok I hear a story.

Cam: I guess it depends on who we play to…

Jamie: Who we play with also.

Cam: We’re meeting a whole lot of old metal guys who are coming to see Metal Church, their hearing us for the first time and they really like what we’re doing because we’re bringin’ it back.

Sharita: Bringin’ back the old days!

Cam: Bringin’ back the old school. The older metal guys are like this is awesome, I’m so glad that bands are still doing this, bands you’re age are still doing this. On the other hand when we toured with Black Dahlia, they’re like younger than us, so they attracted a young crowd. People are like I’m getting into all this old music because of you guys. Were letting people know about some of the older music that maybe the younger kids don’t listen to.

Justin: It was like that lady who was at the show, she worked at the store I went and got my tape at, and she said why didn’t you tell me you we’re in a metal band? I said because I bought a Billy Joel tape. [Chuckles]

Sharita: Ok well I don’t want to hold you much longer from eating; I have a Speed Round of Questions that we like to ask the artists for fun after the very serious interview, ready?

Sharita: If stranded on a desert island what band member would you eat first?

Cam: Probably Shane or myself.

Brian: If the guys are tender then they’d be easier to eat! [Laughs] I say take the smallest person because functionally they’re going to be the least handy.

Brian: Shane. [Everyone else agrees]

Sharita: You only have 3 CD’s you can take, what would they be?

Jamie: This Hero is Gone, Monuments to Thieves

Brian: He was going to say Brutus

Jamie: [laughs] No that one is going to get tossed in the water.

Sharita: Who would you take on this stranded island?

Sharita: Is that unanimous?

Jamie: Nothing lightens on being stranded on a desert island than a comedian!

Shane: I would say Tina Fay because she’s really funny and really foxy.

Sharita: If you were in a drinking contest who would be on your team?

Jamie: The guy from the Man Show! [Laughs]

Matt: Any friend of ours back home!

Sharita: Oh, let’s talk about that.

Jamie: When he wants to shift responsibility over to someone other than his intoxicated self he assumes the personality of Hammertron.

Shane: It only happens with hard booze, beers Hammertron doesn’t really show up.

Sharita: What kind of hard booze?

Brian: Is that the drink of choice?

Sharita: I guess so, we’ve heard a lot of that lately! What’s your favorite comfort food, since you guys are eating?

Brian: I was making fun of it till I tried it, it was delicious!

Cam: I’m a greasy spoon clubhouse, in Canada we call it clubhouse because it’s big as a house! [laughs]

Erika: Do you have any mantras?

Cam: In order to be successful one must maintain the image of success at all times.

Justin: Gear up an get it goin’! [Everyone laughs]

Shane: More can come from a bad decision than indecision.

Brian: Let’s get gay. [Everyone laughs]

Sharita: I thought you we’re going to say what’s on your shirt fuck you pay me. [Everyone laughs]

Brian: Yeah, it’s been a couple of shows that turned out to be just fuck yous!

Justin: and we still didn’t get paid.

Thanks to Dan Forman/Jake at Roadrunner and Brian (3 Inches Of Blood) and to the rest of the band for a great interview!

See how the guys faired in

find out how the band ticks…in Round II 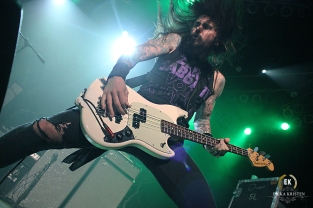 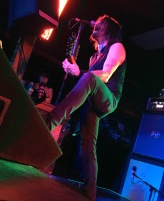 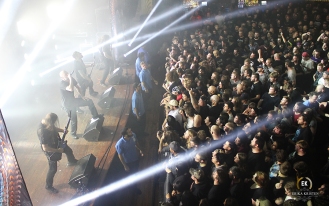 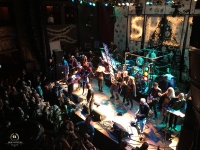