Since the days of Ozzfest, metal festivals in some parts of the US are a rarity. We can’t really count Lollapalooza or Riot Fest since it encompasses every genre. There is still Maryland Death Fest, but that’s on the east coast. In fact, I’ve noticed many of the fests either happen on the East or West coasts, leaving fans here in the Midwest with very little. For years I’ve wondered why, because the local metal community would definitely support a show completely dedicated to heavy music. Could it be the money it takes to produce such a show, the issues it presents like security, the venue, and what it would take to get enough heavy hitters on the bill to make such a festival a draw for loyal metal fans? All these are valid points, but I believe given more thought, a major fest would be successful here. Thankfully someone had the forethought to give it a try and create Open Air.

The inaugural Open Air Festival that occurred July 15th-17th  at Toyota Park  was jam packed with many of metal’s elite like Korn, Marilyn Manson, Five Finger Death Punch, and Slipknot. They even managed to convince German metal band Rammstein to make their only US appearance for the fest, and since the event was outside, Rammstein did not disappoint the huge crowd in attendance. Along with great music, Rammstein provided the very tired audience with plenty of pyrotechnics during their hour long plus set. They played past twelve A.M., delighting the crowds at Toyota Park with their brand of industrial/metal and kudos to the masses for keeping in step.

Looking back at the show two weeks ago, I can say the organizers did a brilliant job on their first try. The venue was perfect with stands for people to sit as well as the field where those in attendance could be close to the stage. The video screens were a huge plus for both stages, giving fans sitting in the stands for mainstage as well as standing away from the second stage, a great view of the performers. The staff seemed to be helpful and knowledgeable during the event, as well as the security which didn’t appear to have much trouble keeping the concert goers in line. In truth, there weren’t that many negatives. Unfortunately, a fan fell to his death on Friday night leaning over a bannister, which many, including us did not find out until the following day. Then, I’d heard about several of the food stands running out of items on Friday, which I assume was fixed after that. Traffic was awful going into the venue, but the local police were swift at getting people out each night after the shows concluded. All in all, the three days were a success, which leads me to ask, will there be more?

The answer is a resounding yes. Check out this impressive list on Loudwire of metal fests this year. Bands are jumping on large fests like these as off dates on their own tours. Or like Rammstein, they might be dropping by to give fans a thrill. Of course with the economy in the toilet, many might not be able to afford the ticket prices, but for others, they make their minds up to pay for a package to see a few bands during a two or three day event as opposed to catching their favorites perform separately. In my opinion, it’s a win win for well-known acts as well as new ones to play to fans and get a decent return. Even with all the issues that go along with putting on a big festival, the rewards are well worth the risks. Playing to masses of people who enjoy heavy music could only open the door for bigger opportunities down the line and fans get a chance to see many of their heroes sharing the same stage.

So why not more? I’d love to see other fests here in the Midwest because I believe metal fans would definitely support it just as they did Open Air. Sure there are challenges, but bottom line, money and new fans can be made with a maximum effort on the part of organizers and bands to make a fantastic metal experience for all. 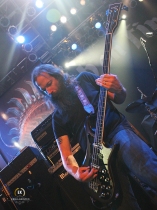 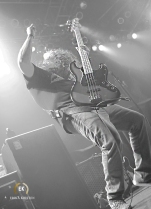