Wait? Does that look like a bill from the late nineties? Yes it  does but it isn’t. Instead, it was the lineup at Mojoes in Joliet  on Tuesday April 9th. Actually, when I first saw this bill I said, what, Sevendust and Coal Chamber touring together? I thought Armageddon was just around the corner but apparently, the bands have put aside all differences to join forces on a nice sized tour, playing nearly sold out shows.
In Joliet, the crowd was definitely ready to rock out with the venue full to capacity, about 250, give or take. It seemed like more but when you’re squished in a small place like sardines, I suppose you’d think it was more too.

When I arrived at the venue and had my drink, Candlelight Red hit the stage. I’d heard of them once and truthfully their sound was very much reminiscent of older Sevendust and other melodic hard rock bands that proceeded them. What I love about the baby bands or rather lesser known bands is their attempt to gain popularity with fans. During their last tune, lead singer, Ryan Hoke asked fans to meet the band and grab a free poster. Lovely gesture considering the price to print up those things. A winning move in my book.

Second up, a band I absolutely adore, Lacuna Coil. I recall when I first saw that band at one of the Ozzfest shows, don’t ask me which one. I was taken aback by their music, the contrast in styles as well as the way they play. Lead singer Christina Scabbia’s voice is still mesmerizing and Andrea Ferro, the co-vocalist adds the edge to offset the melodic and haunting voice of Mrs. Scabbia. I’ve always enjoyed the mix of this band. Hard rocking guitars, pounding drums and the two voices that make for a great signature sound. Another thing about Lacuna, despite the fact they might not be as heavy as their counterparts, they still keep the crowd interested. I’m happy to see them on tour with heavy hitters like Sevendust and Coal Chamber. If you haven’t given Lacuna a listen then you most definitely should.

Third up was Sevendust. In truth although this was a Coal Chamber headlined show it seemed like a Sevendust crowd. The amount of Sevendust tees as opposed to CC was probably three to one, possibly more. Of course, as in past years, the band showed their appreciation to their loyal fanbase, playing such songs as Bitch, Black, Enemy, and Denial just to name a few. Unfortunately, Clint Lowery didn’t make the trip to Joliet for the birth of his child, but his fill in, Troy McLawhorn from Evanescence made sure they didn’t miss a beat. The melodies of Sevendust are always a crowd pleaser and listening to them made the trip out to Joliet totally worthwhile.

Lastly, the headliner Coal Chamber came up on stage. Honestly, I felt the crowd was more into the Sevendust set as opposed to CC but I don’t know, perhaps my ears were still ringing from the other 3 bands. In truth, I’m a huge fan of Dez. I’ve followed his career in CC as well as Devildriver and was happy to see him put together the lineup minus Rayna since that might have been a huge clusterfuck!

Still, the set was a good one, with CC playing the song that got them started, Loco. For this tune and several others of CC’s mosh worthy songs, the crowd made Mojoes rock. Dez Farara was in his usual form, inciting the crowd to move several times and of course they responded. Honestly, I wanted to hear a couple of Devildriver tunes but ah well, I enjoyed the CC tunes just the same.

The new bassist that replaced Rayna seems like a good bass player but I had to admit, I missed Rayna just just because I would’ve loved the reunion of the original band. Despite this, CC put on a very good show, kicking ass and taking no prisoners. I hope Dez figures out which band he’d like to be in from here on out, even if his decision is both. Regardless of what he decides, I enjoy seeing him on stage leading the pack during one of their rousing tunes. Rock on Dez! \m/ \m/ 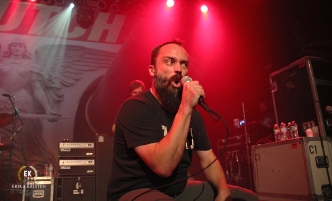 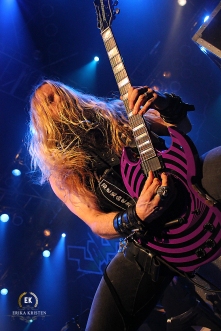